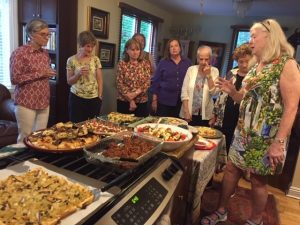 Learning more about the history of the dishes served!

In 2011, a new special topic group embarked on its inaugural journey. The Spice Routes Interest Group combines a potluck of authentic cuisine with exploration of the secret passageways, history, lore, and tastes of the ancient spice trade. During the first year, we vicariously journeyed along the Incense Trail (1000 BCE), feasting on Arabian cuisine; meandered down the Silk Road (100BCE), sampling Chinese delicacies; and joined Marco Polo on his epic journey (1271 AD), indulging in exotic fare from some of the two dozen countries he visited.  We also discovered many intriguing tidbits and fascinating facts from the individual readings of participants. During the 2012-2013 year, we read and discussed excerpts from Shadow of the Silk Road by Colin Thurbron.  The Spice Routes interest group began its third year October 17, 2013 with the theme of the Spice Routes and the Ottoman Empire. In its sixth year, as we ran low on ancient cuisines, the theme expanded to The Global Spice Trade.

Everyone is welcome even if you have not participated in previous years. Reservations will be accepted for the first 24 respondents for each dinner. Please join us on this journey of delicious exploration. Click here if you have questions or would like to receive this group’s emails.

Remember — it is not necessary to be a gourmet cook to participate: wine was ubiquitous along the trade routes. This caravan welcomes all curious adventurers!  Dinners and discussions are held in members’ caravansaries at 7 pm on a Thursday evening, once every few months. As members decide what dish they’ll bring, the email is updated by their “reply all”, and the menu takes shape as other exotic items are added to the dinner menu. 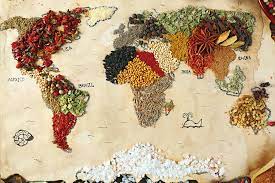